I am dedicated to the figurative, but I always try to put more than realism in my works, seeking the perspective of the emotional and psychological through visual enigmas and the exploration of color, compositions and abstractions.

In my paintings, I usually evoke the presence of nature elements, mixed with the human essence in aesthetically, well elaborated figurative forms.

Since 2018 I dedicate myself to personal projects or commissions that have artistic relevance with creative freedom. Previously, after graduating from art school, for more than 15 years I worked producing illustrations, conceptual art, graphic novels, book covers and other creative works. 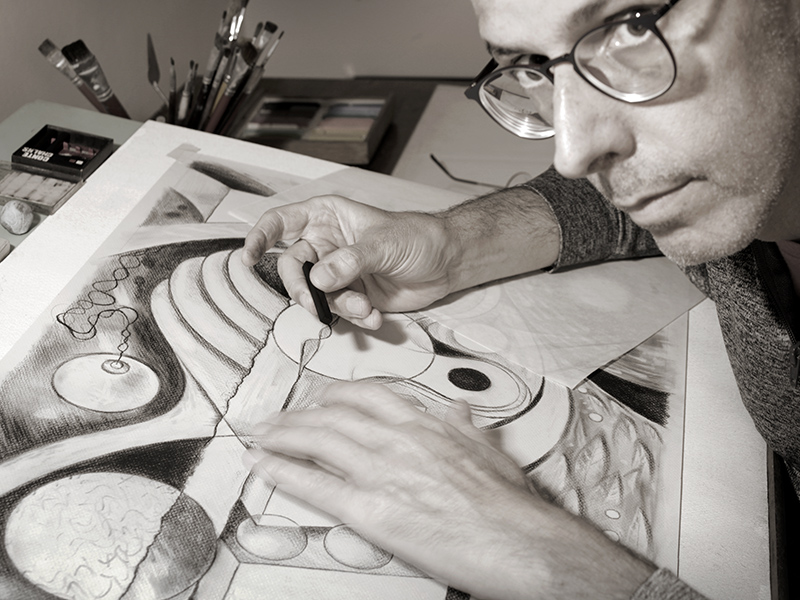 2015 – Participation of Comic Con Experience – SP – in the autograph table with launch of the book Shiroma by Roberto Causo, by Devir Brasil

2009 – Invited to speak about editorial illustration at the launch event of the collection Rumo à Fantasia, at the Viriato Corrêa Library in São Paulo

2007 – Exhibition “Waste from the Fantastic”, held within the events FantastiCom 2007 and 14th International RPG Meeting.

2004 – Signed a contract with Editora Pensamento for the work “Mandalas – 32 Caminhos de Sabedoria” – a project with the arts of mandalas created with the writer Celina Fioravanti.

2003 – Completion of the “Brincando com” collection by Editora Global, having developed, in addition to illustrations, the complete graphic project for 20 educational children's books

2003 – Launch of the work “Mandalas – How to Use the Energy of Sacred Drawings” with CD-Rom and animations, a project created together with the writer Celina Fioravanti – publisher Pensamento

2002 – Launch of the Obra Tarô Místico, a project created together with the writer Celina Fioravanti – publisher Pensamento

1996 – Winner of the “Nova Award” for Illustration

1993 – Beginning of collaboration for Innovation Books in the United States, with illustrations for covers and illustrated comic book pages

1993 – Participation in the First Regional Art Exhibition of Taubaté

1991 – First participation for Ground publishing company, with which I collaborated for more than 10 years with several significant editorial works, such as illustrations, covers and special projects.

1990 – Beginning of activities as an illustrator with the first commission, drawing and painting of a poster for cultural events – Secretary of Sports and Tourism of the State of São Paulo.

If you are interested in getting in touch and presenting your thoughts, fill in the fields below and I will get back to you as soon as possible.